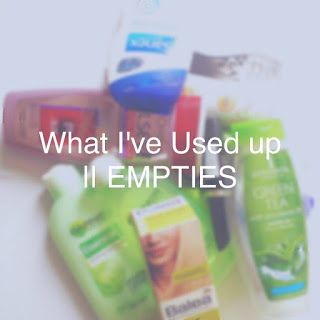 Today I’m bringing you a post on all the things I’ve used up since the last empties post (here is an even older one). I may have left something out, if I threw it out and did not remember to include it in this post.

I did consider writing an empties post every so often, but I realized that I simply don’t use that many products up in order to write one post every month or even every two months. So, I decided to write it when I cummulate enough products.
Now, let’s get started:

Alverde Naturkosmetik eyeliner in 01 schwarz
This is one of my favourite eyeliners of all time. I wrote about it here. I already have and use a new one. It’s quite easy to work with, it stays on, but it’s not terribly stubborn when I want to take it off. Definitely will keep repurchasing 🙂
Fing’rs. Precision Lash Adhesive
I don’t really wear false eyelashes that often, because my lashes are quite long with mascara only. However, from time to time I did like a more dramatic look and that’s when I used this glue. It wasn’t perfect, but it was okay, I guess. However, I did like it a lot for glitter along the lash line. It stuck really well and stayed on for a really long time. I will probably find something that works a bit better, but I’m not mad at it.
Essence gel eyeliner in 01 Midnight in Paris
I remember this product being really nice and easy to work with. It was really smooth and glided on like heaven. However, it dried out pretty quickly. Then I saw a hack on Pinterest about making it manageable again by heating it in the microwave for a few seconds. While it worked quite well the first time I did it (it works only for that time, and if you want to use it again, you have to heat it up each time), I totally burnt it the second time. There was smoke and the smell was terrible 😀 so I had to throw it out. I probably won’t repurchase, since it dries out so quickly.

MaxFactor False Lash Effect mascara
I just recently found this mascara in my collection. To be honest, I kind of forgot about it and it was completely dried out. I did useup a lot of it, so I didn’t waste a huge amount, but I don’t remember it being anything special, so I probably wouldn’t repurchase. I’ve tried some that are so much better than this one.
Alga Mare Algoten tinted moisturizer with mineral pigments by Pyrus
My mom got this for me a while ago, and this is by no means empty. This was my first BB Cream or tinted moisturizer kind of product and I remember thinking: ‘Do all of those smell as bad?’ I can’t even begin to tell you how bad it was. It’s a natural product and it worked quite well actually, but I just couldn’t stand the smell. Eventually, I discovered other brands and similar products and realized that they don’t all smell as repulsive. Definitely won’t repurchase! 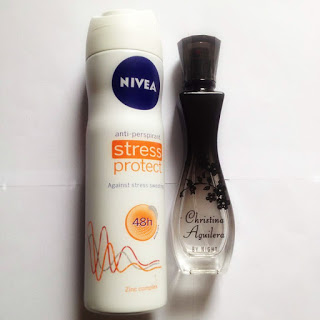 Nivea stress protect anti-perspirant Against stress sweating with zinc complex
I am constantly on the hunt for the perfect deodorant (spray one, not roll on, or whatever’s out there), but they all seem to fail to fulfill my expectations (if you know some great ones, please share!!!) This one was okay, I guess, but by no means was it perfect. I might repurchase, if I don’t find a better one.
Christina Aguilera by Night eau de parfum
One of my favourite night-time perfumes (you can see my other ones in My Perfume Collection). It’s sweet, but feminine and definitely for those nights out when you want to feel sexy 🙂 I already have and use a back up, and will keep repurchasing it!

L’Oreal Paris Elseve Total Repair Extreme reconstructing shampoo
I used to use and love the Total Repair 5 version of this (you can see it here), but I decided I may need a more extreme version of it. I do think my hair is much silkier using this, but I still have no idea which one I like better. However, both shampoo and conditioner are really nice, and quite cheap, too 🙂 I probably will repurchase.
Balea Professional more blond (the rest is in German 😀 )
This is a product used to become (gradually), well, more blond 😀 You are supposed to spray it onto your hair and then dry it with a blow drier. Easy, right? I was blonde for about 2 years, so I decided that I don’t want to dye my hair as often as I had to, and try this out. Bad decision. I didn’t really notice it did something (you do have to use it 10 times to get results, which I didn’t), but what I hated the most about this product was that it made my hair so sticky and crunchy that I couldn’t stand having it on my hair. At all. Not an empty but I will definitely get rid of it (either throw it out, or give it to someone). As you’ve probably guessed- I will not repurchase it 😀
Avon Advance Techniques daily shine dry ends serum
If you’ve been around my blog for a while, you know that this has been my holy grail hair product for years! I’ve talked about it here, so I won’t talk about it for too long. Needless to say that I already have a new one, and I will have to buy another one really soon.

Garnier detoxifying grape extract refreshing cleansing milk and refreshing vitaminized toner for normal and combination skin
I didn’t feel like separating the two, since I don’t really have a lot to say. When I discovered Micellar water, I stopped using the cleansing milk, and it’s almost full, but it’s quite old, so I’m going to throw it out. It worked nice, but nowhere near as great as my micellar water. Toner was okay, I guess, I don’t think it was revolutionary, or anything, and when I found other things, I simply stopped using it. It does have a teeny tiny bit left, so I’m not that sad to throw it out. I don’t think it’s worth repurchasing.

Afrodita green tea with provitamin B5 shower gel
This is my favorite shower gel, for sure. It smells fab, I feel fresh after using it and it’s not drying on the skin. I did buy one for you for my future (soon, I hope) giveaway, so stay tuned. Also, I will keep repurchasing 🙂
Sanex dermo moisturising dermo oils shower gel for normal to dry skin
This is one of the (relatively) new products on the Croatian market. It sounded quite revolutionary, so of course I had to buy it! It claimed to have natural oils, and not to strip the skin of its natural oils, which was quite cool, because my legs are quite dry. While it felt okay on the skin, the smell was aweful. Not from the tube, actually, but mixed with my skin it became absolutely horrible and I never felt clean after using it. Even though I did almost(!) use it up, I will definitely not use it anymore, and will most definitely not repurchase!
And that’s it for my empties post. Did you like it? Have you tried any of these? Would you like to try some of these yourself (maybe I will include some of them in my giveaway)?
Thank you for reading!
See you soon xx
Comments (1,660)
empties

Earn $10, help me make $25 and get cash back when shopping online! And all of that just by signing up through this link and making your first purchase through Ebates!